Being an expert in Spiritualism attracts me quite naturally to works of fiction that focus on that practice, or use it as a backdrop to set a mood. But it's a double-edged sword. Many works cannot fully satisfy because  I know too much. My standards for authenticity are abnormally high. 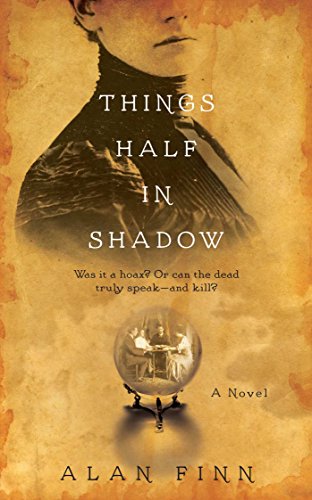 Which is why Things Half in Shadow was such a pleasant, enticing surprise. In this part mystery, part supernatural thriller, Philadelphia reporter Edward Clark begrudgingly accepts an assignment to expose the city's mediums as frauds, and support the strong strain of opposition to Spiritualism running rampant in the city, alongside devout, if gullible, followers in the wake of the Civil War.

Clark calls upon his childhood training as a stage performer to suss out the tricks of Lucy Collins, a third-rate medium at best, and cruel selfish huckster at worst. But before he can expose her, she learns his secret-his real name is Columbus Holmes, the supposed dead son of Magellan the Great, the world-renowned magician locked away for murdering his wife.

He reluctantly agrees to help her only expose her competition, but there's a snag or two. For one, Clark can't see any deception in the seance held by Leonora Grimes. Second, Grimes is dead by the end of the seance. Clark, Collins, and the other seance members were the only ones present. They become suspects in a locked room mystery. Fun!

Except, both Clark and Collins have secrets they don't need the police digging up. In the turmoil, Clark loses his job in the paper, his fiancee Violet breaks off their engagement, and the Police Inspector, his friend, is not helping as much as he hoped. The world Clark has carefully built for himself is crumbling around him, all because of his association with the strong-willed Lucy Collins. Well, you know what they say about opposites. Their interactions were delicious.

To save themselves, the take up the torch of the investigation, and get much more than they bargain for-including a secret society targeting mediums and insight into what really happened on the fateful day Clark lost his mother.

Everything about late nineteenth-century Philadelphia felt authentic: the fervor and opposition for Spiritualism, the sprawling impact of the Civil War, the rules of social decorum that break down once all hell breaks loose.

I might not have agreed with Clark's choice in the end, when it came down to the feisty Collins who knows the true him, and the fiancee who sees the error of her ways, but the book ended with the potential for a sequel. I will wait impatiently to see if one arrives. In the meantime, this was one of the best books I've read this year by a new author, and about a favorite subject of mine. 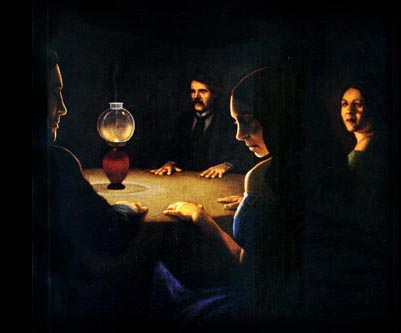