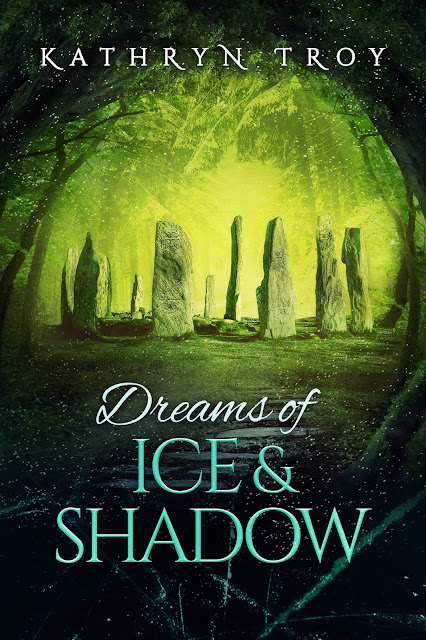 I'm so happy to be sharing Frostbite Book Two: Dreams of Ice and Shadow. The cover is another phenomenal image by TS95Studios, and the perfect introduction to the second title in my romantic fantasy series.

Here's the blurb: (warning: spoilers for A Vision in Crimson!)

Luca has discovered his father’s hideout. He hunts the legendary vampire alone, pushing Katelyn away to safety. But Dracula is not so easily bested. He evades Luca so he can tap into Katelyn’s power—the magic that lies at the heart of Icarya. Luca’s heart sinks as his father draws him further and further from his eternal love.

Across the Great Sea, Katelyn is summoned to the slave city Likhan. After the death of Seht Reza, Likhan teeters toward revolution as her nephew Darien seeks the throne. To help him, Kate must work alongside Alaric, the assassin who will stop at nothing to win her back in Luca’s absence. The dark forces mounting against Darien leave Kate vulnerable to the destructive pull of her elemental nature.

Dreams of Ice and Shadow is the heart-stopping second volume of the Frostbite series, where gothic terrors invade epic fantasy. Unspeakable horrors are unleashed, and Katelyn and Luca’s passions burn brighter than ever as the dangers facing Icarya threaten to separate them forever.

*Dreams of Ice and Shadow is available now on Amazon! And don't forget to grab your copy of its prequel A Vision in Crimson to help you catch up!*