I Name This Land, Icarya!


As a historian, I know better than to celebrate Columbus Day for what it is. but discovering new worlds in the name of great fiction--now that's something to celebrate. So in honor of the holiday I'm going to divulge a little background about the setting for A Vision in Crimson, the first installment in my fantasy series Frostbite.

Icarya's inception started from several sources. The first was from Narnia--a classical treatment of fantasy and hybrid creatures. A perfect setting for a half-man half-vampire like Luca to find his way in life. The base of that high-fantasy concept also suited my sensibility of fantastic creatures, formed from many years of watching Greek myths in Ray Harryausen films, Xena and Hercules, and being born half-Greek myself. To that base, many layers were added. The female protagonist, Kate, was born in a place I know very well--Victorian Britain. She and her siblings were nearing adulthood as they discovered this world themselves. They valued progress and modern conveniences, and at the beginning of their reign, started an initiative to electrify their capital city, Castelmor. Their struggle to keep Castelmor lit is what catapults the beginning of my tale. 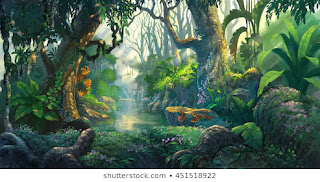 Castelmor is exactly what it sounds like. A Castle Town. Many of the locales on Luca and Kate's journey in this story are influenced by the variety seen in fantasy adventure games like The Legend of Zelda and Ni no Kuni. An example of that is the lakeside village of Veruna at the base of the Northern Mountains, a blend of Zora territory and Lake Annecy, set up in the French Alps. Annecy is one of this world's truly beautiful places. These muses among others helped imbue forest areas throughout the series with intangible, sacred qualities.

As Luca is tracked across the universe by the father of all vampires, the reader is brought to Cathair, Icarya's harbor town. The Great Sea keeps Cathair slick with sweet water, blending with the near-constant aroma of beer and fish in a town fashioned after Marseilles in the nineteenth century, a small, bustling town built into a hill. Frostbite Book Two will take us to further exotic locales, but that tale, I'm afraid, is for another day. Check back in soon for more details about the upcoming title A Vision in Crimson.