Past Imperfect - The Bloodletter's Daughter


My apologies in having the space between book reviews be so long--blame Audible. I was using my free trial to listen while driving, first The Atlantis Gene, which I would never have read beyond the first chapter if I hadn't been lulled into listening to it. When I finally pulled the plug, I switched to The Bloodletter's Daughter by Lindsay Lafferty, choosing something that had been on my "to-read" list for a while, but somehow had not yet made its way into my print collection. 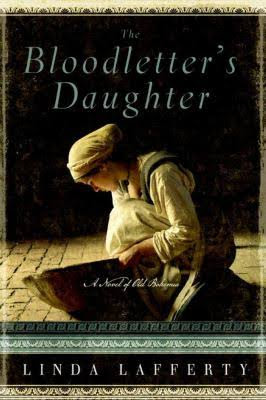 I have mixed feelings about this work. Some things the author does very finely--descriptions are tops in this regard. Of the places in Bohemia and Prague described in this historical fiction, of the bodies of the main characters, and especially and most superlatively, the smells. I don't think I've ever read a book that gave me such a wonderful idea of how everything smelled--whether it was baked goods, flea-bitten men at the bathhouse, or a mad prince. Favoring that sense above all others in her descriptive language was a unique approach to her tale.


Her characterization merits mentioning as well. She did best with the despicable ones--Marketa's mother Lucie and the lunatic Don Julius are standouts. I was horrified by their actions, and sat in my car, in the dark, after a long day and an hour plus commute home, to finish a passage. The many tragedies of her story tug at your sensibilities and don't let go for a second. Don Julius is especial in this regard--you can see the nuances in his madness through the brilliant scenes of a pathetic figure, or one with clarity, and that combined with his bizarre and brutal behavior makes him all the more real.

A few areas were not as graceful: passages of Mattias, the rival of Rudolph II for the crown, were perfunctory at best, and did not appreciably hold my interest. The characters in those scenes went underdeveloped compared to the heart of the tale, and so I could not be convinced to care. Another sore point was  the dialogue. It tended to be repetitive. When the author tried hard to keep the plot points in your head, she recycled phrases, and so what should have been one solid exposition, done fine the first time, became tedious in the second and third (and sometimes fourth) go-arounds.

Lastly, and this is not insignificant, I take issue with the Bloodletter's daughter herself, Marketa. I couldn't get a read on her. Throughout the book, whether she would be sensible or silly was unpredictable. Her characterization was not nearly as consistent as the rest of the cast in this book, whose behaviors are solid indicators of them as people. And though the plot was not predictable in any real sense, all the characters save Marketa acted with a distinct sense of narrative logic, even though, I'm led to believe by other reviewers, not accurate to history. Not so for Marketa. As a historian, the inconsistencies struck me as the author's struggle to get inside this character's head, inserting a modern sensibility against what would have been the circumstances of her life, even if a girl living in her time may not have. I just couldn't suss out what I was supposed to make of her, and it left me unsatisfied in the end.

Be that as it may, all writers are human, and few very works in this world are perfect. The overall journey of The Bloodletter's Daughter and its descriptive power will bring me back for her other titles. But I don't trust Audible anymore, as convenient as it is. My eyes are the more powerful critics.