I did not consume the British TV program Ripper Street in a single sitting, but rather savored it over the course of weeks and months as I watched lots of other things in tandem-Marco Polo, Stranger Things, Broadchurch.... but now that I have finished the first season,  I could not be more pleased with the result. 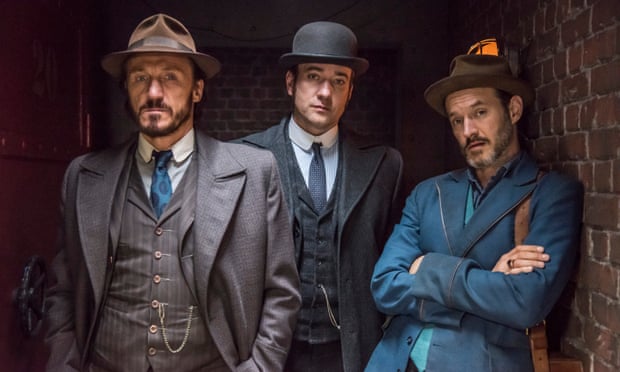 What drew my attention to Ripper Street is the same thing that would draw most in: mention of the infamous Ripper of Whitechapel. I'm no stranger to cinematic renditions of this, and was wary of yet another telling of whodunnit, until I realized that's not with this show is about at all. It uses the Ripper killings merely as it setting-Whitechapel after the spate of grizzly murders, where the Ripper has fallen silent, never to be named. But not all is silent on Ripper Street. This show tells the tales of crime in the wake of the notorious Ripper, with varied and unique plots dealing with American pinkertons, shipwrecks, human trafficking, the first erotica on film, and much, much more. The show has a sharp wit and innate authenticity, taking itself seriously when it must, but always bursting at the seams with high-octane action and hearty doses of comic relief. Relief that comes mostly from seeing the backlot of Game of Thrones flitting in and out of episodes. Bronn is one of the leads, Inspector Reid's right-hand-man, and Jorah Mormont and Roose Bolton had showcase roles. Tonight at the season finale, I got surprised by Hodor, and Juan and Cecilia from The Borgias, a show I am currently watching and will review in very short order.

Ripper Street expertly balances being episodic and having an overarching narrative. Criminal investigations are, for the most part, contained within each episode, but treated with enough depth to be compelling and unpredictable. Yet you are equally drawn in by the deeper plot threads woven throughout the episodes regarding the investigative trio, their origins, temperments, and home lives.

Special touches are places where other Victorian trends like photography, emergent cinematography technology, and charity houses are concerned. These are things of immense interest to me as a scholar of the period, but get so little shrift in our media. To see them showcased here, and so well, was a pure delight for me. So too was the treatment of prostitution. There are plenty of working women on this show, but their active participation and society and their interactions with the police in particular are a master stroke, and elevates this common media type above its standard, flat stereotyping. Prostitution was a bigger portion of society in those years than most people realize, and they did not live as lepers--they were living, breathing members of a community. For a show ostensibly inspired by a whore-killer, to un-objectify them is one of the show's greatest triumphs.

In short, I would recommend this to a wide audience: those who love Victorians as much as I do, but also to those who like procedurals, actions, historical fiction, or even biting social commentary. There is something for everyone on Ripper Street.