Slightly off from Halloween itself, but the horror box that I created for October and beyond pulled up Trick r'Treat. What great fun. This is an anthology film: separate little concepts pulled together by the common theme of Halloween and the age-old practice of trick-or-treating. What was unique about this anthology was the frame story that connected each segment was an integral part of the film, and so the pieces were part of a continuous whole. The film records a Halloween night in a single community, and each piece was a focus on different individuals or groups. Some of my favorites were the murderous schoolteacher and the crochety neighbor, represented by Dylan Baker and Brian Cox. I was surprised to see such well-known actors in this popcorn blockbuster, but each played their role so very well. Anna Paquin was a sorority girl in a segment played all too well, which harkened back to Ginger Snaps, a fantastic film about female sexuality and the monstrous. We get a prank gone wrong, too, as well as an urban legend. All the high points of Halloween in middle America. 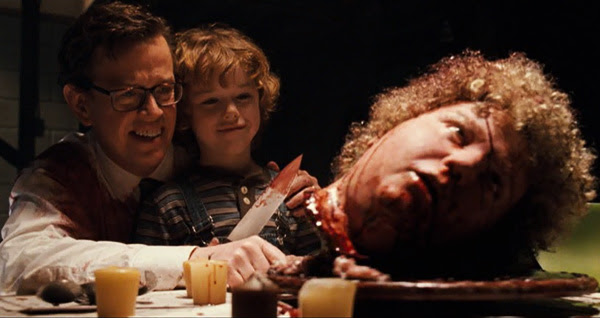 It's not often that a horror film makes you laugh out loud, but this one hit that mark multiple times. It was a perfect blend of grotesque and well-shot special effects with black humor, so you're disgusted and tickled at the same time, which is really quite an accomplishment for the writers and director. The film is reminiscent of things like Tales from the Crypt, which horrified audiences with a good dose of sinister entertainment.

The way the stories weaved together was very thoughtful, giving glimpses of how different characters are connected to each other. That's something that other anthologies that I've loved, like the Amicus collections starring greats like Peter Cushing couldn't do, because of the separate nature of each of the tales. These tales were all happening at the same place at the same time, a master stroke.

So though I do tend in my horror tastes towards the dark and extreme, this was a supremely enjoyable experience, and one I could recommend to horror afficionados trying to share their passion with the less initiated.