I've seen plenty of home invasion movies, and some much more extreme in its violence, but there was something striking and disturbing about Don't Breathe, executed perfectly through suggestion and visual storytelling, with the production values at top notch. 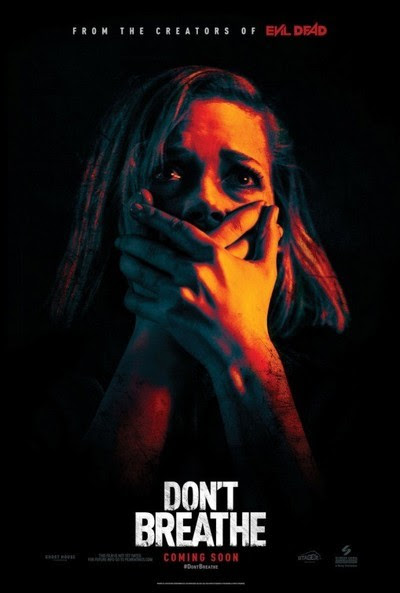 Don't Breathe puts a spin on the home invasion story, where the invaders - a bunch of silly teenagers looking for a way out of Detroit - very quickly fall victim to the homeowner, a blind war veteran with every reason to keep people out of his house. This twist in the narrative allows for a very interesting exploration of morality. It goes beyond being grey: it fluctuates on a scale, effected by each turn of the plot and the choices the characters make. How you felt about the film, and how justified any one character was in committing violence changed over the course of the film. That's something I haven't really seen.

The storytelling was organic. Everything made sense, even the surprises. They justified why the blind man is so keen on keeping people out of his house. Even though you don't see the reason coming, the fact that there is one, instead of just a random conceit of a kook who has more security than he needs, is much more compelling. The well-laid out plot unfolded on the screen in a way that kept the behaviors of the characters unpredictable, making it edgy and full of suspense. At no point did I feel I was watching yet another iteration of some overdone trope. Another triumph for low-budget horror.
Also, the blind man, played by Stephen Lang, is extraordinary. His voice is at tones vulnerable and menacing, (which exemplifies how our society sees broken veterans) and his movements are jerky, clipped, and stunningly horrific.

The production values are what really elevate this. The set of the man's house is so tight: sharp corners, narrow hallways, and at all times as the story moves through the house, you feel its confinement. This is integral to the narrative, for the blind man knows the way through his own labyrinth. The people trying to escape have a really rough go of it, especially when the lights go out and you get a wonderful shift in lighting, which is spectacularly crafted throughout. The darkness and careful lighting of the whole film is one of its best features. As is the organically made music, which sets the perfect mood, and is made all the more interesting by the short film on its production, provided with the blue ray, that shows an orchestra constructed from the kinds of materials found inside the house. Creatively brilliant.

In short, Don't Breathe is an exemplar of everything that can be done without a whole lot of money.