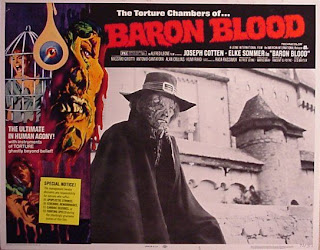 Let me start off by saying, I fell asleep during this movie. Twice. I was surprised at the beginning of Baron Blood, directed by Mario Bava, by the fact that Baron Blood is apparently Dracula. Except not really. The monstrous Baron come back to life goes by the name of Otto von Kleist. I suppose impaling people at the castle gates was more common than we thought: for that's the initial story behind the Baron. Add to that the fact that he was burned to death, and cursed by a witch to forever suffer the torture of his death. The film amounts to a series of interesting propositions that don't go anywhere, or at least get there very very slowly. That threw me, as did the lackluster performance of his descendant Peter, played by Antonio Cantafora.

This dopey college kid comes back to learn about his family history, and within half an hour is in the castle, using incantations to bring the Baron back to life with Eva (Elke Sommer). It works, and immediately after, of course, the incantation to condemn him forever is blown into the fireplace. Duh. The rest of the story involves the Baron on a killing spree, and the young couple trying to enlist the help of Dr. Hummel, in charge of restoring the castle. The scene when Peter is attempting to convince Dr. Hummel of the truth is absolutely devoid of emotion. The English dubber wasn't helping, but the face of the actor was entirely expressionless. No exaggerated features, no intensity in the eyes, nothing. He could have been saying, "See Jane run fast," for all the power of his performance. So the tension of the story falls flat.

Where Bava shines is in the visual aspect of the film. When Eva is running from the killer, the shots of her running through the streets are beautiful, moody, and well-crafted.  Sommers has a distinct look: she's modern and modelesque, and watching her emote was the most stimulating thing about this film. The same is true of the scene where the Baron makes use of the iron maiden: 'nuff said. But unfortunately, these features weren't strong enough to save the plot, which had some twists and turns, but didn't keep gravity away from my eyelids. For a director on such a tight schedule, it's understandable, I suppose, that not every film is a masterpiece.