Writing Dialogue - To Say, or Not to Say

I read a great post about dialogue this morning at another blog, This Itch of Writing, and since it's so relevant now to the WIP keeping me up nights (Up From the Bog, if you're new here), I thought I'd add my two cents. 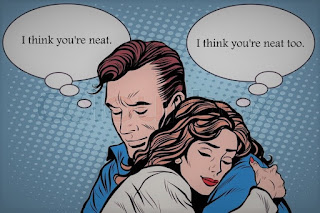 So many authors struggle to create powerful, poignant dialogue-I recognize it in my own writing when I re-read, and it was something I had to really work at in A Vision in Crimson, my first fantasy installment. I'm proud of the finished product, coming soon, but it was one of the bigger obstacles I faced. It took many many many rewrites to get it where I thought it should be. I think for me, part of the functionality of rough dialogue was that I was just getting my feet wet as a fiction writer, so I wasn't really in my characters' mouths yet. I was hedging a lot ("Well," "you see," "you know"...) a linguistic action I'd come to recognize when I studied forensic linguistics in college.

Beta readers helped identify problems, as did the fact that I was writing something epic. During the many drafts of A Vision in Crimson,  and across volumes as I continue to write the series, I was spending a lot of time with my characters. The more I wrote them, the more natural their speech came. Because I knew them better, for one, and I was getting more practice at my craft. I'm catching myself doing it again now as I'm knocking out a first draft of Up From the Bog. I have more writing experience now than I did for my first project, but not with these characters, especially since I'm writing two first-person voices. It's a challenge. A satisfying challenge, but a challenge.

Even for people not writing a series, it could be an interesting exercise to write smaller pieces with your characters in different scenarios, to get good practice with them as being distinct voices, and discovering the right linguistic chemistry between them.
Posted by Kathryn Troy at 6:07:00 AM