For Auld Lang Syne- Horror of Days Gone By

I love modern horror cinema,  so much so that I've exercised a good amount of my academic energies studying it. Those efforts might one day see themselves in print, but as we all wax nostalgic at the start of a new year, I can say of horror: they just don't make them like they used to. So many older works have a special feel and charm to them, that I can't readily make tangible with words. Yet, it is palpable to the watching experience. So, for those of us basking in holiday relaxation, here are nine films to watch (or in my case, re-watch), to bring back the good ol' days. 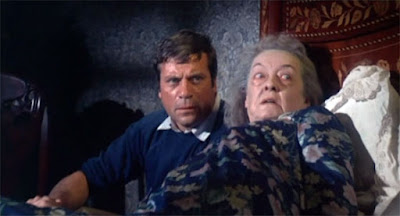 Burnt Offerings (1976): Oliver Reed, drunken sot that he was, is near and dear to my heart, and is especially powerful in this adaptation of a psychological thriller by Robert Marasco, set in a sentient house.

Lets Scare Jessica to Death (1971): Perhaps not the scariest or goriest slasher, but utterly memorable for its strong narrative, skirting a fine line between insanity and the rational mind.

The Wicker Man (1973): Nothing says old-fashioned like a pagan ritual. The one depicted here is older than the influence of Satanism and the like, and is infinitely more interesting for its local, unique flavor. A striking contrast is made between the shock of the witness to the festivities and the utter normalcy attributed to it by its participants. Grand acting by all.

Don't Look Now (1973): This has all the markings of weird, artsy, Italian film-making done right: portentous visual omens, questions about sanity and memory, and just enough of the supernatural to make you question what you're seeing. A thoroughly immersive film experience.

What Have you Done to Solange (1972): A standout among gialli, for its setting, top-knotch visual style, and a compelling narrative and cast that keep you guessing, no matter how many of these films you have seen.

Hammer Films: I could suggest practically anything produced by Hammer in their golden years, and it would scratch that nostalgic itch. But for true Hammer fans, for true horror fans, there's much more to Hammer than their remakes of Universal classics. They excelled especially in psychological thrillers, like Paranoiac (1963), and mad science films like the franchise begun with The Quatermass Xperiment (1955). I only wish they had made more adaptations of Sherlock Holmes stories. The Hound of the Baskervilles (1959), starring Peter Cushing as Holmes, was the best iteration of Britain's premier detective ever, excepting Jeremy Brett.


For a real spine-tingler, try William Castle's Strait-Jacket (1964), starring Joan Crawford as a woman recently returned from an asylum for a double-murder, and whose nerves are put to the test in short order.

Looking over my selections here, I see that I'm nostalgic about something very specific in horror. People on the brink of sanity. There's still plenty of that in the industry, I guess, but...not like this. Perhaps because of their age. These filmmakers were not as saturated as we are with this trope, and their twists and turns feel fresh and unpredictable. The originality in these scripts is beyond reproach. Enjoy these movies, as I have, and may they come to be favorites you return to as well.

To All my readers and faithful followers, I wish you a Happy, Healthy, and Prosperous New Year, filled with adventures both real and fictional. I look forward to a 2017 robust with groundbreaking gothic, fantasy, horror, and all the weird in between, including TWO publications by me! One of the nonfiction variety, the other a dark fantasy. More details to come!
Posted by Kathryn Troy at 10:11:00 AM