The Howling is one of those landmark films that I just never got around to seeing earlier, which is why it ended up on my TV last night. 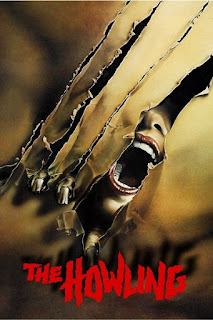 It certainly didn't become my favorite film of all time, but it's clear why it was so highly acclaimed. The transformation sequences are generous, and utterly horrifying. When I saw the werewolf makeup in full view for the first time, I was awestruck by the enormity of it. And towards the end, there are a
horde of them-so you know they made more than one suit, which shows they had a very nice budget, used very wisely.

The Howling, adapted from Gary Brandner's novel, is an interesting split between traditional werewolf tropes in a more modern setting and a leaning towards what we easily recognize as urban paranormal fantasy. The majority of the movie takes place in an out of the way country retreat for people who require therapy. We follow news broadcaster Karen White there after she meets with a serial killer and witnesses his gruesome death. While at this country complex, there's lots of fog to set the mood. You even got the "Van Helsing" character type, a skeptical Brooklynite running a store chock full of occult books and weapons that made me laugh. There was also the strain of investigation, and questions about lycanthropy/sanity, and the nature of humanity.

Towards the end, there are questions about how an ancient organism might co-exist in 20th-century society, and whether they should adapt or remain in the shadows. That's a very modern concept in the paranormal world. It was smart and enjoyable to see this story straddle the line between the "gothic" and the "paranormal," and showed the continuum on which these tropes rest while still captivating its audience. Kudos.