Angel of Storms- Too Good to Put Down

After reading something atrocious, (The Nosferatu Scroll, review below) I decided to take a short break from working on my new author goal, and went with a tried and true. Angel of Storms, the second volume of Trudi Canavan's new trilogy Millenium's Rule, could wait no longer. 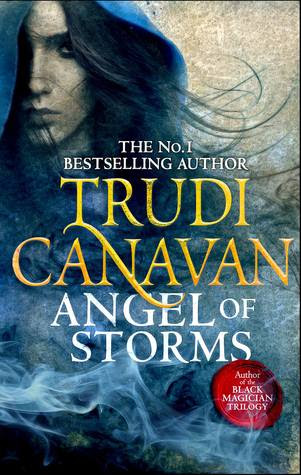 I barely put the book down in the two and a half days it took me to read it. Canavan is at the top of her game. She is a thoughtful, compelling world builder, able to craft believable, relateable characters who are put through the ringer, and you right along with them. The cosmically epic story of a universe on the cusp of great change is continued through the experiences of two powerful sorcerers, Tyen and Rielle. Rielle's story is a beautiful one, showing how she picked up the pieces of her life after heartbreak, ridicule, and expulsion from her world for accidentally using magic, which is considered stealing from angels. Thing is, the angel that has forgiven her and offered her a new life is no angel-he's the Raen, the most powerful sorcerer in the universe and ruler of all the worlds.

The Raen is the most interesting addition to Millenium's Rule. He's super powerful, and the only person whose mind you don't get any insight to. I might have been disappointed by that, if it wasn't so compelling. Like all great and terrible rulers, he makes hard decisions, some with unforseeable consequences. So Canavan has added more universally compelling layers-questions of ethical governance, selfishness/selflessness in the face of great power, and how different perspectives frame "historical truth."  He interacts in equal turns with Tyen and Rielle, pulling their lives closer together towards the end, even though their narratives are not truly unified. But as the book comes to a close, you have impressions about where the third is going, and I can't wait.

It's not a perfect book, however. Though what Tyen is doing is more interesting than his flight from his magic-poor home world in Thief's Magic, on the whole he doesn't really experience a whole lot of growth, and his number one motivator, to release Vela from her page-bound prison, hasn't appreciably moved forward. Rielle, however, has progressed in leaps and bounds, and I found myself disappointed whenever her passages were interspliced with Tyen's. The difference between my level of interest in the two mains only grew further in this work.

And:I know Canavan doesn't care about happy endings of a romantic nature, and I absolutely commend her for that. But it's killing me. Really. I feel every heartache like it's my own,which makes her a wonderful writer. Hopefully there will be no more loose ends and happiness enough to go around in the third installment, set to be released on my birthday.