Age of Myth - Fantasy Fun for Everyone

For anyone paying attention, it has been a while since I posted a book review. All of my most recent content has been either film reviews or articles about writing. There's a reason. 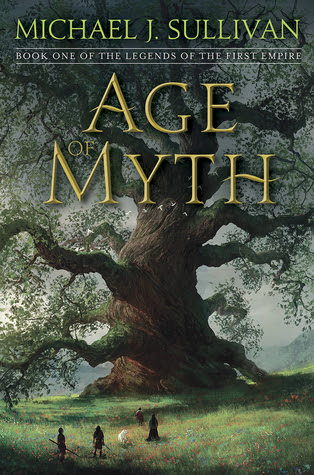 I go through phases as an author-when I'm researching or outlining a WIP, I'm also reading in large spates, and don't watch a whole lot of films. But when I'm writing, I read very little, because I run out of head space, and I can't conjure up my own world on top of somebody else's. Movies, then, become my leisure time. That's the trend you're seeing. I'm eyeball-deep in Up from the Bog. I'm very pleased with its progress, and hope to share more about that project with you soon(ish).

In the meantime, I have been listening to audiobooks during my very long commute, and recently finished Age of Myth by Michael J. Sullivan. I've never read any of his books before, but did not need prior knowledge of his series Riyria Revelations to enjoy the beginning of this new saga, Legends of the First Empire.

The fantasy tropes are fairly standard: bad omens, world coming to an end, unlikely orphaned hero emerges. That being said, the many nuances of Sullivan's storytelling were unique and vibrant, and reminded me that it is possible to have been exposed to similar things and still be surprised and refreshed by them. Killing gods (or beings who only think they are) is certainly not something you see every day. And I am a sucker for myths, gods, and goddesses.

The story was saturated with humor, something I appreciated very much here that is not normally to my taste. It was done quite well, and made the characters authentic and relateable as the world-building deepened. It helped immensely in this instance to have the humor narrated, and narrated excellently, so I could laugh out loud in my car from one comedic/fantasy situation to the next. The women in Dahl Ren were fabulous. Another thing I picked up on was the heavy influence of British lore, made more sharp by the British narrator and his many accents from all over the U.K. I only noticed such things-traditions about certain kinds of spirits, like trees-because of my own research for the bog story. Not too much on the nose, but suited very well to its traditional fantasy trappings.

The most unique aspects of the story, for me, were certain elements of the world-building, especially in naming conventions. Those pleased me the most, as did the carefully wrought scenes of the young mystic Suri, reading bones through fire, for instance. Grounded in this world's supernatural traditions, yes, but still compelling.

I would recommend this series to fantasy fans of all sorts, for there's really nothing not to like here. If anything, perhaps he's playing it too safe. Not in those last few lines, though, the sly dog. Only time will tell.