French horror cinema is one of my favorite subgenres for its originality and artistic edge. French directors like Christophe Gans, Alexandre Bustillo, Alexandre Aja, and many others are always at the ready with something fresh, beautiful, and positively disturbing. I had high expectations for Diabolique, (1955), the horror/thriller admired by the masses, 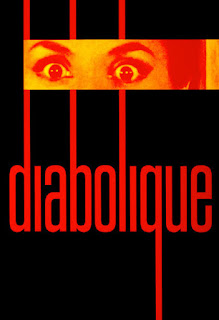 The film takes place at a boarding school, centered around the headmaster's wife and his mistress, who together plot to murder the brutal, demoralizing headmaster. Their plan is well thought out, right down to the plastic tablecloth made ready at the scene. Killing him one place and leaving him to be found in another was another stroke of genius. Except, well.... 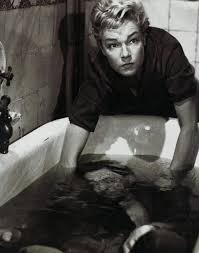 There were many interesting plot points that weaved the story in different directions, letting you know there was more to what you were seeing, but the film was always one step ahead of you. It's not often I'm kept guessing for a long time, and I certainly enjoyed that. The narrative was filmed in a fairly straightforward way, which kept possibilities open as you try to uncover just where this plan went off course. Is it the wife, whose Catholic guilt and weak heart can't handle what she's done? Or is it the level-headed mistress, who's so practical as to leave her accomplice in the lurch? The women play brilliantly off one another, and kept the tension going long after the headmaster is murdered, which was a given in the plot from the very first.

The visual effects on the headmaster's corpse were lovely (by lovely, I mean gruesome), and the scene depicting the act of murder was, like the entire film, straightforward and lacking in frills, which made the ultimate crime resonate all the more strongly for its natural realism.

In some instances, that realism was taken too far. There were small moments when I noticed interesting camera angles-two or three uses of mirror shots come quickly to mind, but there are not nearly enough of those. The biggest thing missing from this film was a musical score of any kind. If Alfred Hitchcock had gotten his way and bought the rights to this novel adaptation first, there would have been (reek reek reeks!) for sure. Nothing of the sort here. The most remarkable sound was the constant clacking of the women's shoes on the floor. Such an austere aural choice is deliberate, and does lend itself to that naturalist effect, but I can't say for sure that it heightened the tension. If anything, at times the dialogue or tension fell flat without those additional cues. Highs and lows were harder to recognize, and as a result the pacing suffered.

It picks up towards the end as the film draws to its conclusion, which I figured out just at the last minute. It left me wanting more out of the rest of what I'd already seen, but I'm not quite sure what.

I would absolutely recommend it to lovers of international horror and psychological thrillers. But be warned that you have to commit to watching the slowish setup to earn your reward.