Return of the Living Dead - How Did I Miss This????

There's so much good horror out there, especially 80's horror, that it is easy not to see everything you should. Still, there's no excuse for why I only saw Return of the Living Dead  (1985) for the first time this past week. I've actually given lectures on zombies in cinema, for crying out loud!

It's a really special thing to be able to make someone laugh out loud one second, and be utterly horrified the next. There's something about eighties horror that has this magical ability, and Return of the Living Dead is a shining example of that. The movie starts with a macabre sense of humor about the inventory of the medical supply where the story begins, and how they came to possess some of the "ghoul" bodies from Night of the Living Dead (1968). Right away, the story sets itself up as an intellectual sequel to the influential work, and wastes no time establishing some well-known zombie tropes.

Two of my favorite things about this movie: the social interactions and the science zombification. The line between 80's punks and "normal," ambiguously moral businessmen is sharp in some ways, but not in others. They have to come together, after all, to fight this pestilence, and the question of punks putting something over on older stiffs is answered all too quickly, as one of each are the first to be infected. 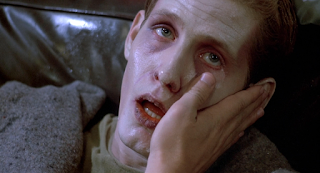 The transformation of the characters slowly into zombies was the simplest, most gruesome effect I have ever seen. They never die- that is, they never lose consciousness, although they experience clinical death-no pulse, a sub-human body temperature, and excruciating pain described as the agony of decay, of cellular death and decomposition. Their shuddering account, and that of the decayed female torso (one of the most disturbing puppets I've ever seen-Ugh!) explain how eating brains helps alleviate the pain of death. It's really an ingenious take on the simpler premise of Night of the Living Dead and an important foundation for everything that comes after. It also reminded me of Edgar A. Poe's "The Facts in the Case of M. Valdemar," a man who describes the experience of death while under hypnosis, and depicted to such haunting effect in Two Evil Eyes - The Facts of the Case of Mr. Valdemar (1990)- directed by George Romero. Talk about serendipity!