Yokai never cease to interest me. Yokai are local Japanese spirits, that hail from older spiritual traditions. They can be mischievous, vengeful, frightening, and more often than not, physically bizarre. All of these were deliciously true in Yokai Monsters: 100 Monsters (1968). 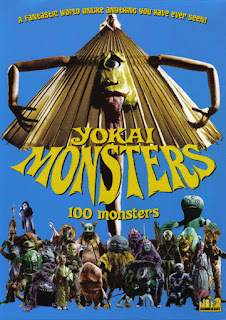 There is something inherent in the film quality of late 1960s horror films that draws me in-the production values are aesthetically pleasing when some care is taken, as it was in this film set in a traditional Japanese village. The costumes were authentic without being bombastic, which I deeply appreciated, and the special effects regarding the yokai are well-crafted and mostly practical, which makes them perfectly uncanny and disturbing. The few monsters that you do see are the stars of this film. The plot of the film is generic, true, but still well-written, and allows the spirits to take center stage as they exact retribution on greedy land developers who seek to destroy an older shrine, committing dozens of other heinous acts for that purpose.

Most interesting was the exposition within the film about rituals regarding the yokai. Set at a party in the villain's home, catering to other Japanese elites, he brings traditional storyteller priests in as entertainment-they tell stories of the ghosts in candlelight, but are not permitted to complete their ritual. When the idiot son encounters a yokai, hilarity ensues. His performance was perhaps the best, the umbrella monster with an extended tongue that fondles him my favorite. That, and the river that speaks. Simplest thing in the world to execute on screen, and yet managed with haunting effect.

I was at turns tickled and creeped out by what I saw, an overall spectacular experience, and I'm glad to say this film turned into a franchise, which I will consume in short order.