Shoulda Stopped at Three - Into the Fire 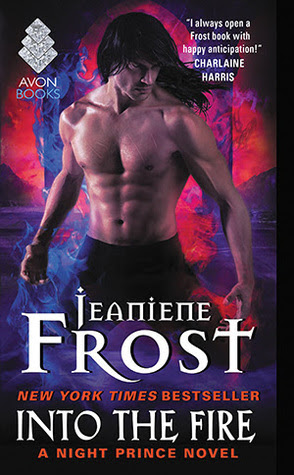 Books with shirtless men are normally not my thing. Don't get me wrong - I rarely pass up a tale with a romantic thread in it, given that the context is of interest-something gothic, fantastical, supernatural, or historical. But I have extremely high reading standards, especially in regards to the actual craft of writing, and lots of seemingly good concepts (like vampires) are largely wasted on people who couldn't write something worth reading to save their lives.

The Night Prince series by Jeaniene Frost came into my orbit by accident, but once I set myself to try it, I read books 1-3 within a week or two. I was able to forgive instances of lazy writing when they were balanced by explosive romantic tension between Vlad Tepesh (yes, the real one, we're told), and Leila, a girl whose body is a constant conduit for enormous amounts of electrical power. The fantasy-action oriented plot was continuous over the course of the series, and though impractical most times, it held together the romance story nicely. As usual, by the end of the third book, one problem was solved, but another was just beginning. Vlad, the chauvinistic, medieval prick, finally buckles to his love for Leila, who, despite solving most of her own problems, is repeatedly kidnapped and tortured. Those darker strains of the plot are interesting, but when Frost tries to pack in too much supernatural ability and too many characters, a lot of things get lost in the shuffle.

Into the Fire, the last installment of this series, was the most disappointing of the bunch, and the many flaws dramatically outweighed its good points. Leila is magically tied to Vlad's stepson Mircea, the mastermind behind the betrayal in the last volume. When he gets cut, she gets cut, and vice versa. So when someone kidnaps Mircea to manipulate Vlad, using Leila as a target, the clock is ticking to sever the spell binding them together.

How the couple is meant to achieve that is one of the glaring examples of how thin the plot is. Could the answer lie with magic, necromancy, legacy power, Cherokee mysticism, demonology, vampirism, Egyptian mythology.... So many options are presented that it's hard to keep up. The worst bit:by the end, it appears that the link is NOT severed. So plot-wise, the book is pointless.

But who cares about plot in these guilty pleasures? You came for the romance, not the plot, right? Well. It's the slimmest in this volume above all others. Apparently marrying the characters drained them of their romantic interest - another myth this book abuses. Deeper than that, there's no character development here. The tension in the earlier books worked because you watched Vlad struggle to accept, and then express his emotions, without being an overbearing idiot that puts Leila at risk even as he tries to save her. The impression of their current relationship: Vlad isn't changing his destructive ways, and Leila is going to live with it. I'm sorry, but no. That's not how marriage works. That's not how character development works.

Finally- to refer to Dracula as drivel is a laugh. Without that "drivel," this book wouldn't exist. There's a reason that an ultimate work of mood and genre has never been out of print for more than a century.

The purpose of new books in a series is to give you at least a little something new. I feel cheated.