The more I read of Trudi Canavan's work, the more I'm beginning to see the patterns in her fiction. That doesn't make it any less enjoyable, but perhaps some things didn't come as so much of a surprise. I read The Novice, the second installment of the Black Magician series, which follows Sonea, the girl from the slums who broke the protective barrier around the Magician's Guild simply by throwing a rock. The first book, The Magician's Guild, is about the race for Sonea to escape the magicians, who are feared more than respected, and their quest to find her before her out-of-control magic destroys her and the whole of Kyralia. 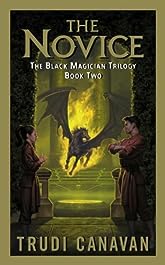 By the end of the first book, Sonea decides to become a novice of the guild, to learn to use her power, despite discovering that Akkarin, the High Lord, practices a forbidden blood magic. The Novice tells the story of Sonea's first year in the guild, and the growing pains of being the only intake from the slums, where most magical ability hails from the great houses of Kyralia. I've always appreciated the authentic, compelling social structures in Canavan's work, and in that regard The Novice was no different. Here, she deals with two things new to her fiction: bullying, to the point of out-and-out harassment and assault, and the ostracization of gays.

The story of Guild Ambassador Dannyl traveling abroad to trace Akkarin's old steps, and perhaps find a way to stop the High Lord, was a really slow burn. His tale was repetitive for the most part, and his segments did not drive the plot forward. The adventures he and his librarian sidekick Tayend encounter were not half as compelling as the drama between Sonea and Regin, another novice who gangs up on her time and again, escalating from classroom pranks to prohibited actions that can get her killed. This made the book unbalanced, because I only cared about Dannyl's quest some of the time. And the payoff wasn't spectacular. Him revealing that he's had the feelings he's been rumored to have for so many years, and that he enchants himself into asexuality, is heartbreaking. But it constitutes all of 5 lines. 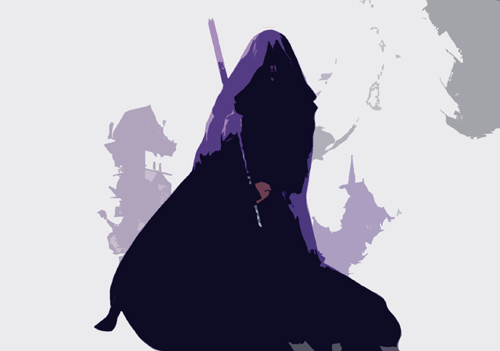 I cared much much more about the fact that no one, including the magicians who should be monitoring the novices, especially the guardian to the ringleader Regin, do nothing to stop the harassment. It reinforced for me the idea set forth in the first book, that the class divide is so strong that even mature magicians from the houses feel the same way as the novices. They just don't act on it. It was infuriating, and considering how strict the Guild is supposed to be about training their novices, it didn't make sense that this activity went on for months unchecked. The one or two people who do care are depicted as absolutely helpless-not just to help Sonea, but to help themselves as the High Lord becomes more and more proactive about protecting his secret. I caught hints of The Raen in Akkarin, Canavan's "High Lord" character for her new series Millenium's Rule. The Raen is hard, sometimes cruel, but an effective leader because of the difficult choices he makes. By the end of The Novice, we're left wondering if Akkarin really is the villain, so again we're back to that idea of perceptions. It's a very strong, cohesive concept.

Ultimately, Canavan is best at developing characters who take hold of your heart and don't let go. The third volume, The High Lord, is on my bookshelf, but I must take a breath before I finish it, to savor it all the more.