A Shallow Horror -The Neon Demon

Beauty queens can be bitches. The beauty industry, likewise, is a dog-eat-dog world, with fierce competition between models, photographers, makeup artists, etc. That is the setting of The Neon Demon (2016), which follows the new "it" girl around L.A. for a few days, before things get ugly.

Overall I enjoyed this film, and appreciated the special attention paid to artistic shots, but it wasn't robust enough for me to merit it being a feature-length film. Not with the plot as thin as it was. This would have felt much sharper had it been shortened as part of an anthology, or simply just a short film, but the violence that is blended with the artistry of this film was only strong in certain places, leaving a lot of empty space in between scenes that could have carried a more complex plot, rather than the very expected jealousy that brews among girls who have been in the business longer than the angelic-looking newcomer, whose face and demeanor catch the eye of designers and photographers as being "true" beauty, rather than the manufactured faces and bodies of the competition. 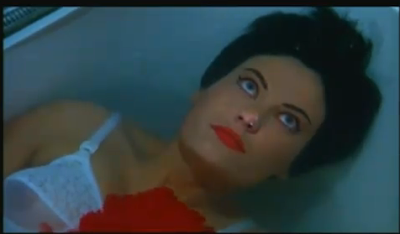 When the competing girls try to capture the new girl's look (literally), things get interesting, and the violence is smartly done, but it just doesn't go far enough. By the time those scenes of violence begin to escalate, the movie is over. And the nature of the violence itself (I don't want to give it away) is something I have seen before, so as nice as the shots were, more originality would have paid off there. It's a matter of the writing, not the storytelling, if you catch my drift. And with subject matter like this, it's all too easy for me to compare it to Blood and Black Lace (1964). In other words, there's a very hard act to follow.

The director Nicolas Winding Refn has gotten my attention, but I want to see this kind of talent being put to real solid use. Firmer, more intricate writing on par with the photography would have made this stellar.