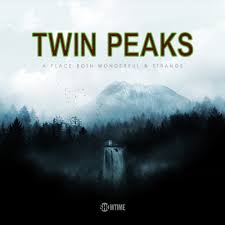 I've waited for the frenzy to die down a bit, allowing myself to digest Showtime's revival of David Lynch's cult show Twin Peaks. I've come to the conclusion that it was very much like the original show, in that there were certain things I couldn't get enough of, and other things I could have done without. Furthermore, that this sort of imbalance, which is frustrating because of how strongly the "good" segments resonate, is part of Lynch's style.

The great parts of this show were really great-I clung to every word during the FBI segments, and waited with baited breath for Dougie Jones to wake up, and realize himself as Agent Dale Cooper, the poor bloke who's been trapped in the red room for twenty-five years.  The segments taking place inside Twin Peaks were great as well-I especially loved Hawk's conversations with the log lady, and the seriousness of those scenes, despite their bizarre content. It made their dialogue feel immediate and urgent, despite its cryptic nature.  The same was true of the Garland Briggs narrative. You were never 100% sure what was going on, but you got more and more clues along the way. The special effects in alternative universes, swirling sky vortexes, and the lost time at Jack Rabbit's Palace were so out there, and yet so menacing and disturbing at the same time.Those scenes are the ones that satisfied the most.

On the lighter, humorous side, I loved the Horne brothers. They were endearingly hilarious, as were the Mitchum brothers.

Bringing everything we saw this time back around to Laura Palmer was a master stroke. But the problem was we didn't get any sort of revelation or closure as to the nature of Laura and the larger significance of her murder, or Cooper's quest to rescue her.  Not even a Lynchian conclusion.

For me, that comes down to a genius who has too many ideas in his head to see them all to fruition. There was an inordinate amount of time spent on things that ultimately didn't matter. Audrey Horne, for example. And her and (evil Cooper's?) son. And Norma's diner. The worst offender was Jacoby's "shovel out of the shit" radio program. While I fully appreciate that these things populate the world Lynch has built and give it some of its flavor, there were many episodes that felt slow as sin because too much time was being spent with them, to the detriment of the things that keep me absolutely riveted. The end result was a big fat question mark for Laura Palmer and Dale Cooper, and an only marginally satisfying reunion of Cooper with the Twin Peaks Sheriff Station.

Lynch's "take it or leave it" approach to his art is his prerogative as an artist, true. But, Lynch does not exist in a bubble. He has editors, producers, distributors, and an audience that have allowed his creation to come into being at all. So I don't think it's unreasonable for a show that's so unconventionally good to be somewhat conventional in leaving its viewers satisfied. I'm not saying I need a happy ending, but I need to be satisfied by what I watch, not frustrated by it. So as much as I loved Twin Peaks, there were lots of misses within its greatness, and I feel that Lynch made a major misstep by ending on the note that he did. There is only one solution: more Twin Peaks.