Damn you, Trudi Canvan. Can't you let your characters be happy?

The conclusion to The Black Magician Trilogy, The High Lord, is everything I hoped it would be, and more. We learn the true intentions behind the High Lord Akkarin's use of black magic, a secret magic that will get him executed if it is discovered.

The slum girl Sonea has risen a bit since her flight from the Magician's Guild in the first book, (my review here) earning her place at the guild as a student and as the High Lord's favorite in The Novice, (review here!) even if she came to that position through blackmail for knowing the High Lord's secret.

In this final installment, Sonea learns all the honorable reasons behind Akkarin's practice of black magic, and joins him in the impending war against the Ichani, an ancient enemy that strengthens itself though black magic, drawing power from their slaves as well as the people they kill. Once the Magician's Guild discovers Akkarin's secret, Sonea stands with him, and the guild very stupidly and very publicly denounces and exiles them into the lands of their enemies, leaving themselves wide open to an attack too powerful for them to withstand. Meanwhile, in the Sachakan wastes, everything Sonea and Akkarin have been through together in the past few days, and the past few years, and all she now knows about him, comes to a head. In the most pleasant of ways.

The old arrogance of the Guild is turned on its head as they completely fail to defend the city from the threat, only surviving through the return of Akkarin and Sonea from exile, and their alliance with the Thieves and their secret nexus of tunnels through the city that allow them to pick off their enemies.  Then, of course, there's the final confrontation, just in case the guerilla-style warfare didn't satisfy, which it did, since it showcases just how strong Sonea has become.

I admire the tight, cohesive way in which the geography of Imardin, as well as its distinct, class-based neighborhoods played an integral role in the Ichani invasion. I have to admire the amount of thoughtfulness it took to have all these pieces come together in such an exciting and authentic way at the end. With most of Imardin destroyed by the battle, the Guild is entirely shaken up, both in numbers and their approach to black magic. It will be interesting to see how those lines get redrawn.

Can't say I'm happy about the ending though. It's powerful, authentic, and heartbreaking. I can't stand that Canavan seems allergic to a happy ending. But, for all that, it's a million times better than lots of stories that do give me a happy ending. Her books linger, so I just have to learn to suck it up.

I'll let this one simmer a bit before diving into The Ambassador's Mission, the first book in Canavan's Traitor Spy trilogy, which takes place in Imardin some time after the conclusion of The High Lord. 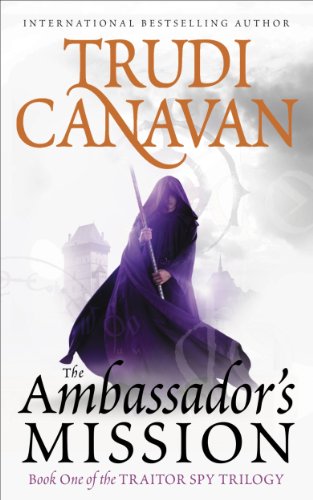