An Above Average Episode - My Sister's Grave

I am very selective about my picks for thriller reading - regular readers of this blog know that by now - but when your choices are limited to Prime Reading while on vacation, you take the best of the bunch. I picked up My Sister's Grave because it had a bit more going for it than your run-of-the-mill person disappeared premise, because it was the sister of the detective who'd gone missing, and it was a years-old cold case. 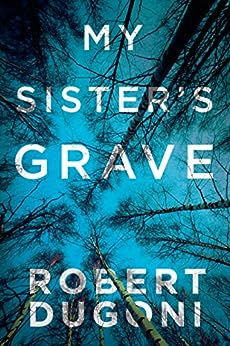 The writing of the characters and their dialogue in the beginning was so bad I almost put it down, but the plot of the mystery itself was sufficient. When I say sufficient, what I really mean is it would pass as an episode on Law and Order, and therefore held my interest long enough for me to get through it. I liked the partnering of Det. Tracy Crosswhite with her childhood friend turned lawyer (and love interest), and the return to a town that would rather forget the disappearance of Tracey's sister than give her justice.

There were some flaws - the splicing of the past and present was clumsy, I didn't care so much for the sister that went missing, her "Laura Palmer-ism" felt forced, and the culmination of the mystery was a dramatic shift in the tone of the book that didn't really work for me.

But all the stuff leading up to it- clues that Tracey obsessively hoarded,butting heads with a sheriff who'd rather let it go, the legal journey of the man wrongfully imprisoned, and dealing with the ghost of her father's control over the town-that stuff all worked.

I realize this is not a glowing review, but it's not meant to be. It was fine, but I was never really invested. Some of it worked, some of it didn't. Whether or not you might like this depends somewhat on the details that make you pick up one thriller vs. another, or your tolerance for less-than-stellar writing. .Take it or leave it.