It took very little to convince me to watch Netflix's new show La Forêt - it's a dark police procedural, and it's French. 'Nuff said.

Not enough done, unfortunately - not enough in the show to compete with more compelling procedurals like Broadchurch. It has a lot in common with the BBC thriller, which begins with a death of a child in a small town, where someone from the village, someone the investigators have known all their lives, is responsible for destroying their idyllic existence. 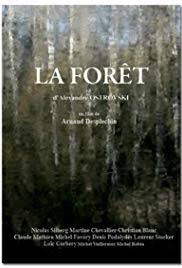 In the case of La Forêt, the children in question are older, and are beginning to explore their sexuality in ways that aren't entirely legal. These shady connections highlight how little the parents of the village (including Virginie, one of the lead investigators) knows their children, and will ultimately lead to the person behind the killings and abductions, both in the present and those of the decade prior.

There was a missed opportunity with this prior decade. We see that the adults of the village are all familiar with these events, sometimes directly involved, but the story does not pull these plot threads in meaningful directions. From an acting point of view, the adults were stellar, mostly Suzanne Clément (Virginie) and Patrick Ridgeremont (Thierry), and I wish they'd had more of a plot to work with.

In a seeming aside, there's a secondary storyline about Eve, a teacher, discovering her parents' identity. There are some intersections with the investigation, and a mythic wolf that goes nowhere (story-wise), but the connections between her personal quest and the current investigation felt too slight, too neat and tidy.

That was perhaps my biggest issue with the show - it moved through certain plot points so quickly for the sake of getting closure and tying off loose ends, that the show doesn't allow itself to go deeper into the village's past, deeper into the characters, or the changes/characterization wrought on the village as a whole. Broadchurch had that sense of chaos in spades, where the whole world doesn't make sense anymore. Maybe because of my affinity for that show, this one felt merely sufficient, and perhaps even a little derivative. I really wanted to like this more, but there it is.