With so much historical fiction focusing on WWII, I was very happy to see Witchmark focus on conjuring a world much like the one after the Great War, with its emergent technologies and innovations - and some magic mixed in, of course.

The romantic tension between Miles and the gorgeous god-like man Tristan who brings a murder mystery to his doorstep was delicious; it was a very clever use of simple physical contact to evoke a deep well of desire, and I bought it hook, line, and sinker. I also really enjoyed the interplay between their personalities, with Miles being more reserved, both in his love life and in his work, vs. the more playful and mischievous Tristan. 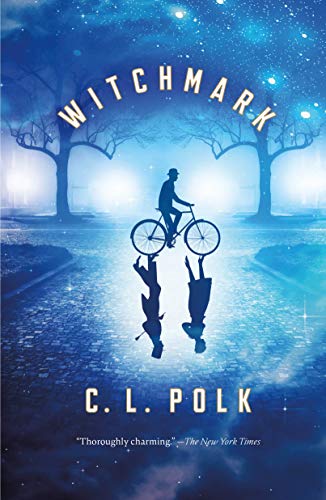 The primary plot - the private investigation of a witch's death, which slowly reveals how magic and politics operate in this world (pervasive, but secretive), was very interesting, although I do have to say that even though I came to this book for its historical influences, I don't quite feel that they were used effectively. All of the technologies, with the exception of magic, are of this world. Basically everything operates exactly as it did in Earth's past- just running on ether instead of electricity. It wasn't the most original deviation from historical detail that I've seen, and in many places it felt like a crutch, where the author would have to play catch-up to explain why things are the same in this alternative world, but not. And often that roundabout explanation wasn't sufficient for me. I would have liked more conceptual emphasis dedicated to the world building here that might evoke a sense of the early 20th century, but looked less transparently like the 20th century. It just didn't go far enough away from its source material.

The political/family drama was very safe and expected for fiction that deals in these periods of propriety and knowing one's place in society and in their family. It worked well for the characters, most of whom are unlikeable except for the two males stealing the show, but it wasn't anything I didn't expect once I realized "family drama" was part of the narrative.

As much as I liked following Miles and Tristan around, the second book seems to focus on Miles's sister. First of all, she was one of the most unlikeable characters and I have no interest in sympathizing with her, and second, I don't know if I quite appreciate the duplication of character dynamic - ie, first book male/male romance, second book female/female romance? I'm all for LGBTQ representation in literature, and I devoured this book in short order, but it should be done because it feels right and is organic to the plot, not simply for the sake of it. Which is how the blurb for the second book in the Kingston Cycle struck me, especially with my lackluster impression of Polk's ability to write a super-solid historical fantasy. Is that just me?