Though Redwine's re-imagined fairy tales have been popular for some time, The Wish Granter is the first one that I've picked up. I was a bit afraid that I wouldn't care for something that would be geared towards a Young Adult audience, or something that had the writing quality of Twilight and massacred beloved fairy tales that I appreciate in all their dark glory. 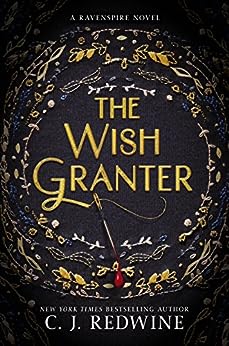 I was pleasantly surprised. The writing was sound, the fantastical world was well fleshed-out and believable, and the romantic interest between the new princess and the swordsmith Sebastian kept me turning pages. I especially liked the complexity of his character as someone who had an abusive father and could thrive in the dark seedy underbelly of the city, but at the same time was fearful and vulnerable. He was arguably the most interesting character I've read in a good long while, so I really enjoyed that.

I enjoyed the princess a bit less, simply because I don't like it when female characters are forcefully depicted as spunky. I'm not saying they can't be witty, or intelligent, or go against the grain, I'm all for that, but it did feel like the book tried to hard to depict her that way rather than finding some other organic way to display that element of her character. Her actions were more believable than her nonchalant dialogue, and so her voice and speech mannerisms were the thing that really didn't sit well, although taken as a whole she was sufficient.

The thing about this book that puzzled me the most was the Wish Granter himself. He was written more as a vicious mob boss. I'm not saying that's not threatening, but it seemed out of place in a fantasy book, and I felt that his villainy was so expansive that it read as unsustainable, and I would have preferred to see him be more devious and cunning, rather than always coming in guns blazing. The elements that did hew a bit closer to fairy tales were the parts that worked for me. (Loved the living breathing house and the crone who tends it for him).

All in all, I'm interested to read other titles in the Ravenspire series. So that's a win.