When an Inspiration Becomes a Crutch- Heartstone 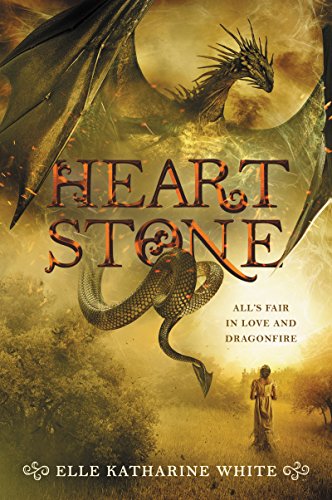 I picked up Heartstone because it promised a romantic fantasy with dragons, which I don't read as often as I should. But what I hadn't seen in my earliest exposure to the book was that it was inspired by Pride and Prejudice. I'm well aware of the romantic classic, having read it many years ago, and I am well aware of just how popular this title continues to be. However, I have generally shied away from books that are re-imaginings of old books, and this title in particular. Its character dynamics and quirks are not really my cup of tea when it comes to romance. I prefer smoldering looks and deep longing, rather than snide put-downs and uptight indignation. I was going to back away automatically when I realized that's what I held in my hands, but it was already in my hands, so I gave it a shot.

I wanted to like this book a lot more than I did like this book. The fantasy elements were quite satisfying - the creatures were those you'd expect in a fantasy book - ogres, dragons, wyverns, and such, but the way all these species interacted with each other and with humans felt easy and natural, and not overly complicated. That was enjoyable, and I wish more on that front had been put on offer.

The romance - well, I already said I didn't care for Elizabeth and Darcy, didn't I? So why would I swoon over Daired and Aliza (yeah, really), when Daired is a 100% purebred asshole? He was absolutely the most unlikeable romantic lead I have ever encountered. So it was satisfying, in a way, to see Aliza turn him down flat when he proposes to her out of the clear blue, and actually insults her during the proposal. It was quite another thing to watch Aliza then fall for him in the span of a few pages. But when she does, it's semi-believable because Daired stops acting like an asshole, and acts like, I don't know, someone who might actually be attracted to her. And therein lies the real problem. Daired as a character is not believable at all. The author basically wrote him one way to build up animosity between them, and then wrote him as a completely different person after the proposal plot-point that is supposed to shift Aliza's view of him. He didn't actually change. He just poofed into a dreamboat. And that was forced, and contrived, and inorganic, and I couldn't relate. Which was a shame, because all the stuff going down with dragons and giant monster wyrms and banshees and all that was really something.

I hope this author writes more fantasy, and maybe can come up with characters of her own, and can stay authentic to them, rather than tying them in knots that make no sense, and make you see the puppeteer, rather than the characters.