Bohemian Gospel is an interesting mix of historical fiction and fantasy. Mouse, the orphan girl who has lived all her life in a cloistered church until she teams up with Bohemia's new king Ottakar, has supernatural abilities-she is able to work her will, and is a miracle healer, which earns her the young king's admiration and an undefined place in his royal court. Her power lies in her voice, thus the nickname - she fears her own words, lest she accidentally do or say something she didn't intend with grave consequences. 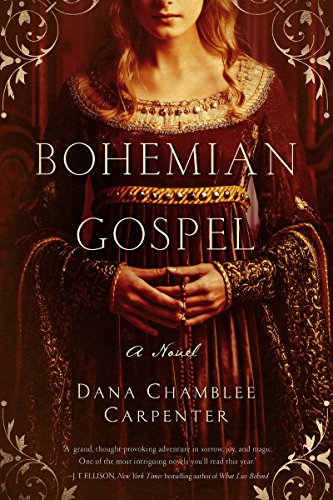 It was an intriguing setup, one that I haven't seen before, with lots of vivid historical details that would satisfy the most avid reader of historical fiction. I loved the character Mouse, and seeing her inner struggle to both accept what she could do but also feel that it came from someplace less than godly, which is why she has no family and no ties, even to the people who raised her, who feared her. Ottakar sees her gifts as a benefit to him, and the two characters grow side by side in an engrossing narrative.

However, this book suffers from something that's become an increasingly common pattern in the fiction that I've been reading: the tight narrative just unravels in the last quarter of the book. As the stakes for Mouse's relationship with Ottakar become higher and higher, and Mouse uses more of her powers, the author switched gears from the narrative tone throughout the book to turn Mouse's life into one of pure, unmitigated suffering. She had suffered, to be sure, but her life and experience up to that point had been more nuanced and complex. And I certainly didn't think there'd be a happy ending for an essential nobody who falls in love with a king. But it went beyond that, to the point of feeling gratuitous. The only purpose I saw in the trajectory of Mouse's story towards the end of the novel was to essentially cut her off from anything you've spent the last few hundred pages reading about, just to get you to an ending that, really, didn't feel like it fit the book at all. I can't say more than that really without giving it away, but it was a very unsatisfying and lengthy conclusion. Not because I sympathized with the plight of the characters, which would have been a fine ending, but because the ending I did get felt so disjointed and contrived. There's really no other way to put it. So while I might pick up another title by this author who engrossed me for most of the book, I'll go into it with a very wary mind.