Missing Something: A Fever of the Blood

The Strings of Murder was one of the best starts to a series I've read recently. I thoroughly enjoyed both McGray and Frey as an odd pairing of uptight British and rough-and-tumble Scottish detectives as they investigate cases with supernatural underpinnings. I was especially excited by the fact that the second book in the series, Fever of the Blood, was set to tackle witchcraft, especially the infamous witches of Pendle Hill, whom I actually lecture about in my history classes. 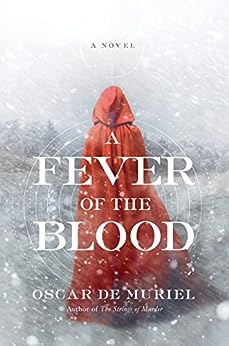 The investigation elements of this book were just as good as the first, and I especially liked the way in which witchcraft was defined, but the story was lacking the same fervor and intensity of the first title. We focused more on McGray's family situation in this book, and I did miss some of the domestic drama from Frey's background from The Strings of Murder, or at least seeing how events of the previous book continued to play out. It wasn't just that McGray's family story was not as interesting, but that it felt one-note. We didn't learn significantly more than we knew the first time around about his insane sister, and the story (and McGray) were spinning their wheels in this title rather than seeing McGray moving forward as a character and as a partner to Frey. So their dynamic felt a little stale and taken for granted as well, and I would have liked to see some more interesting growth between them as they got themselves tangled up with the biggest nest of witches in Britain.

I mentioned before that I really loved how witchcraft was depicted here - one final thing I'd like to say on that count is that when I read the author's note at the back of the book, de Muriel said that he used some ideas from Latin American and Mexican ideas of witchcraft as well. I thought the inclusion of those concepts was fantastic, and I would love to see something from him, in this series or otherwise, than can show that unique flavor a bit more prominently!

Still looking forward to the next installment, which is always a good thing.