Not Quite Heaven-Sent: The Angel's Game 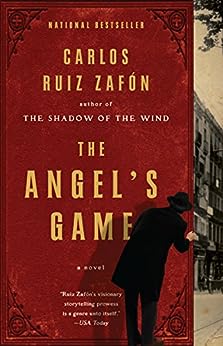 I was very excited to read The Angel's Game, the second installment of Carlos Ruis Zafón's Cemetery of Forgotten Books Series. I loved The Shadow of the Wind, and was anxious to delve back into Zafón's lush prose and beautiful rendering of postwar Barcelona.

I was drawn in by the quality of the writing. But as I neared the end of this tale of a writer of cheap sensational novels who takes on a mysterious gig that seems to have driven the last occupant of his house mad, I realized that even though the writing was phenomenal, the storytelling was not. The tone of the book's language is more like literary fiction with a hint of the Gothic, but for the kind of narrative Zafón set forth, his language didn't actually carry the genre. That might sound weird to say, but it wasn't the same kind of experience that I'd expect if I were reading the same premise written by any of the top names in horror. There was some indefinable, intangible aspect that was lacking, and though the plot moved fairly smoothly from one point to the next, I didn't feel an emotional connection, wasn't compelled by the mystery. One that seemed fairly obvious from the get-go, and a little bit stale. Maybe it's the word choices, or how the mood is set, but it just didn't read right for me, and it was a huge letdown.

I also found the protagonist to be less and less believable as I read through the book, making decisions that went against his own practical, self-serving nature and risked everything he held dear for essentially a writing gig that he professes didn't mean as much to him as his own works. So to see his world fall apart for something that ostensibly wasn't worth it, even to him, was jarring.

It is sad to say that I most likely will not pick this author up again, as my reading of this one took a bit of the luster off Shadow of the Wind for me too. What was a great first book now felt formulaic, and taken together, they were lacking the chops to write about monsters and demons in a way that can feel compelling.