Don't Show Me Your Hand: The Thief's Daughter

I enjoyed The Queen's Poisoner so much that I came back to the sequel, The Thief's Daughter, much quicker than I normally do. And while there were things that I did like about this book, there were mostly the continuation of things that I like from the first book - the concept of the Fountain-blessed for example--but the way in which the characters grew in this book only made sense some of the time, leaving me feeling like the author's intention was more transparent than it should have been. 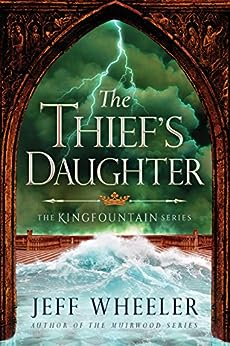 I speak specifically about the way in which Owen Kiskaddon, the young boy ripped from his home who convinced the tyrannical King Severn that he could see visions, has grown into a man who is capable of many things, and yet couldn't seem to find his way out of Severn's shadow in this book. He consistently did the things his king asked of him even when they went against his own conscience and growing love of his childhood friend Elysabeth Mortimer, and while I buy that some of the time, I can't buy that all of the time for a man of his age-full of impulses and passions, especially about the things that matter the most to him, like Elysabeth. So Owen came off as contradictory, because he's grown as a man and is more powerful than he was as a boy regarding his abilities, but in the end he is powerless against a king that he can, in fact, outwit, whom he had been outwitting for years. It just didn't make any sense. The same can be said for Elysabeth. I don't know a single teenage girl who would have taken the lot the king handed her with a graceful smile, and not ever (even in private) showing the explosive emotions of a girl in love. If anything, she acts aloof to her own fate, which makes me question what if anything motivated her, and made her even less likeable as a character than she was as an annoying brat, always in Owen's face. So the way in which this book ends felt like it was set to make these two suffer for the sake of it, not because it actually made sense or that the decisions that led them there made sense.

Additionally, Severn himself does things that make no sense. You don't conquer someone then give them a substantial prize to bind your kingdoms. Sorry. No. I can't think of a single time in history that that's happened, and so again, super contrived. In a way, this second book was an odd title in that its main message seemed to be "hey  - remember how awful Severn was in the first book? Well, since everyone's grown up in his presence they seemed to forget that somehow, but they'll sure as shit remember to hate him now!" And that's what I didn't understand. I didn't get the transition from fear to loyalty. Because the characters didn't act out of fear. They acted out of fealty that felt misplaced from the get-go. So none of their decisions felt grounded in the reality of their experience as laid out in the first book.

I'm still going to read the rest of the series, but I just hope we can get our shiznit back together again.
Posted by Kathryn Troy at 12:59:00 PM