After reading Preston & Child's Thunderhead, I was excited to jump  into Relic, focused on an allegedly cursed object and the havoc that it wreaks on the American Museum of Natural History. 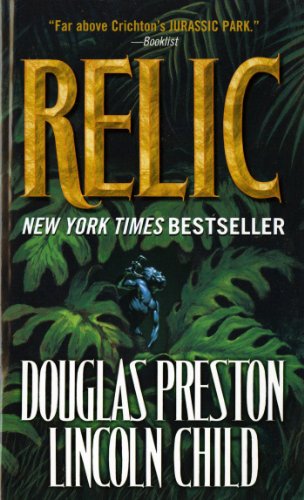 What I really enjoy about this writing duo is that they bring a lot of meticulous detail to the scientific elements of the story. Those details make the museum and its characters feel authentic, and it also adds to the suspense of the story because everything is plausible and believable down to the tiniest plot points. In this instance, the Manhattan institution is plagued by gruesome deaths and disappearances on the eve of a sensational exhibit about the supernatural. The centerpiece of this exhibit is a figure of Mbwun, the diety of a secretive Amazonian tribe that is believed to have gone extinct. And all of the disasters seem to be connected to the delivery of the figurine to the museum after the expedition team itself disappeared into the jungle.

There was a mediocre film adaptation of this in nineties, but the text itself had so much more nuance, and the combination of discovering the source of the curse, parsing out the competing personalities of the museum bureaucracy, and the tension between FBI agents and local law enforcement kept me turning pages well into the night.

I especially liked the introduction of Special Agent Prendergast, whose southern charm reminded me so much of Gabriel Knight. I'm very much anticipating his further adventures.