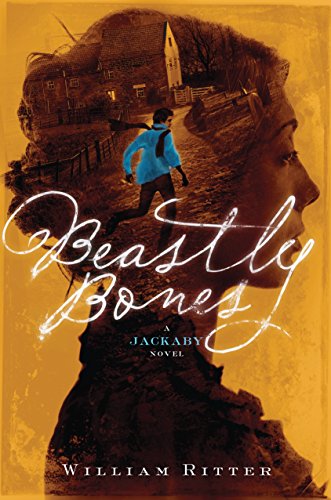 I'm so pleased to finally say that a series that had a good start had a great second showing. I enjoyed Jackaby very much the first time around (see review here), and even though I felt that there were too many paranormal entities being investigated at once, the story and the characters pulled it all off surprisingly well.

In Beastly Bones, the second Jackaby book, the story was much tighter, focusing on a magnificent but also highly unusual discovery of dinosaur bones out in the New England countryside. The characters progressed quite nicely, including Charlie, the human/dog shapeshifter whose cover was blown in New Fiddleham in the last book. The new characters were also well-developed, which is not common in episodic characters and was greatly appreciated. The feud between two scientists over the dinosaur bones and their penchant for sabotaging each other definitely added another layer of possibility to the mysteries.

Once the main threat of the book reveals itself (no spoilers here), the level of danger was keenly conveyed, and the combination of the grim reality of certain creatures and adventures with the more whimsical tone of the writing was refreshing and realistic.

I also thoroughly enjoyed the passages regarding Jenny, Jackaby's ghost in residence. The scenes where she acts in ways that send chills down Abigail's spine were very effective, and the promise of this storyline being made center stage in the third book wants me to dig in all the sooner.