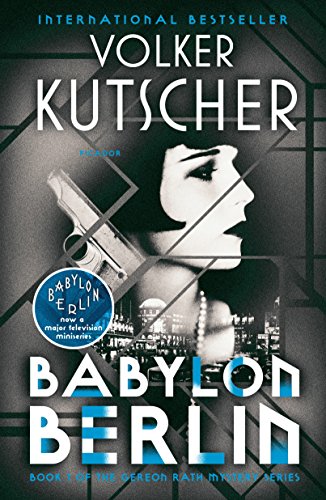 I've reviewed the show Babylon Berlin on this blog before. The short version is: I loved it. I loved it so much as a crime series set in the Weimar Republic that I picked up the first book in the Gereon Rath book series.

I wasn't disappointed by the sharp writing and the fast pacing. However, I was at a disadvantage, since I knew who the bad guys were, and knew all the major plot points of this first book, since that's what the show has covered up to this point. There were some changes, such as the relationship between Gereon and Charlotte, as well as some other elements of Charlotte's character that I won't divulge, and I found myself preferring her on-screen representation.

The same was true for Gereon in some instances. In the book, they make it clear that while he had been a soldier during World War I, he had been lucky enough to never see combat. In the show, his shell shock is a major component of his character, and helps sets the tone for his interactions with other people as well as the overall atmosphere of the show. It adds a nuanced layer to the paranoia and anticipation that comes from suspecting one of his fellow officers is responsible for the death of another.

So as much as I love the storytelling, I'm thinking that if I do prefer the vision of the showrunners to some of the decisions in the books, then I might be better off sticking to the show. But that's almost never how I respond to adaptations. So I'm a bit torn here. I'll be keeping up with Rath - only time will tell in how many formats.