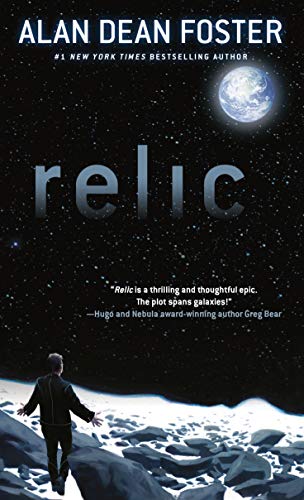 I'm extremely picky with my sci-fi. Anybody who reads this blog on a regular basis knows that, because I review sci-fi very very sparingly. But  Relic by Alan Dean Foster drew me in with the premise that Earth is treated as a sort of mythological place in a cosmic future, and that the last Earthling alive might discover the clues he needs to finally go home again.

That's quite a stretch from the truth of this story where Ruslan, the last known Homo Sapiens in the universe, helps the alien population of some other distant planet so that they can study it the way we might be interested in uncovering lost civilizations in the Americas, and so that he can see a planet that he has never actually known, but has only heard about in lore as a child of human planets growing up on some other planet.

This was the main flaw with a majority of the writing - this lack of connection. It's hard to sympathize or empathize with Ruslan, who hasn't made meaningful connections with his alien neighbors/captors, or with the competing alien civilizations in a race to claim Earth-based discoveries (what the actual draw is for these other people is never made clear). There just wasn't the emotional heft or impact of a story ostensibly about the last man of Earth, if not on Earth. And then, all of the premises for the story just fall apart at the end, and we're left with a story that amounts to a useless goose chase, or just a cosmic misunderstanding. It didn't give me the "aha" moment that I'm sure was intended; it just left me thinking I'd wasted my time on a faulty premise with no real feeling to the writing.