The Apocalypse that Wouldn't End: Wanderers

I'm so so sooo picky with my sci-fi books. And when I saw the size of it, I did hesitate a bit. But I like sleepwalkers, so I cracked Chuck Wendig's Wanderers open. 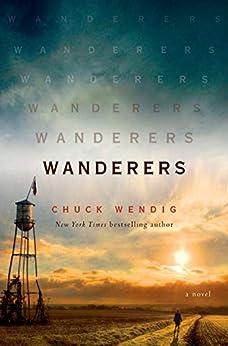 It started off really strong. The strong phenomenon of mass sleepwalking, all to some unseen destination, was told through the eyes of a former CDC agent. I liked the investigative aspects of that. I also liked the introduction of Black Swan, the predictive AI that seems to know something is coming, but not quite what.

I don't really know what happened to that very cohesive premise. The book went on for ages, mostly about stuff that you might read in a more pretentious literary novel about not much at all. In laymen's terms, TMI about the mundane stuff that the characters deal with that is not germane to the plot or to understanding their motivations as characters. And a few hundred pages in, when you are told what's going on, it doesn't make a goodly amount of sense. Then the story became about too many things all and once, and they didn't necessarily go well together - it was weird diseases and psychological disorders and zoonotic jumps and the risks of artificial intelligence and, randomly, the ultimate horrors of white nationalism.

Though it makes sense to explore the social fallout for a strange phenomenon like the walkers, it took up some a large portion of the book that it made me question what the central theme of the book was supposed to be. Add to that that it had some of the most violent (and therefore resonant) scenes, and it muddled the message and purpose of the book even more.

The ending was the size of a normal-sized book, and it dragged on and on and on, in very predictable ways. From about the halfway point on, reading had become a chore. What does that tell you?