Thrilling, if a Bit Unsatisfying: Snowblind 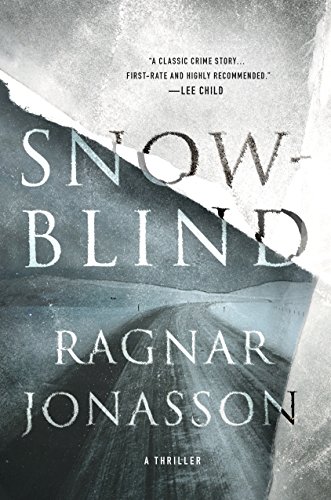 I like my crime thrillers in all shapes, sizes, and especially locales. That being said I'm always a fan of tight spaces - like ocean liners - or in this case, a town completely enveloped in snow at the edge of the world.

The world-building and mood to Snowblind was good, and the development of each of the distinct characters in this little coastal village was compelling. But regarding the criminal investigation/mystery aspects of the plot, there was a little something wanting.

The focus of the story falls squarely on Ari Thor, an outsider from the big city who takes a police job in a small town and quickly becomes embroiled in a murder investigation. However, a large amount of time is taken up by the character himself, rather than the crime and the characters most intimately connected to it. For example, the narrative centers around his strained relationship with his girlfriend and navigating around his boss's authority. It's not so much about learning about the other villagers and trying to determine who might have shoved an old man down the stairs. It is about that, but it never really feels central. And the fact that a rookie cop is technically on the correct scent from the get-go feels a bit contrived, and didn't really allow for me to engage with the potential suspects or the nature of the crime on its own terms. Not enough time and attention was dedicated to those elements of the story, which you would think are the story, with the personal details of Ari Thor playing second fiddle.

The conclusion of the story was not satisfying in any sense of the word. There aren't any dramatic twists and turns, and even when everyone's on the same page about who did what, the response from the community/police force amounts to a shrug. Call me stupid, but that's not how we deal with murderers.

Without that sense of compulsion or urgency, it's hard to see how I could be compelled to read about (I suppose) another murder in another installment if not much is going to be done about it. It's a bleak outlook, which perhaps is what the author was going for, but it just didn't hit the right notes for me, even if the characters were interesting.