I can't only read Tessa Dare when I'm in the mood for historical romance. I recognize this. But that doesn't mean I've yet found a suitable alternative. I gave it my best shot with Marie Tremayne's Lady in Waiting, but although the first chapters depicting Clara Mayfield's escape from a monster of a groom were so promising, that promise went unfulfilled. 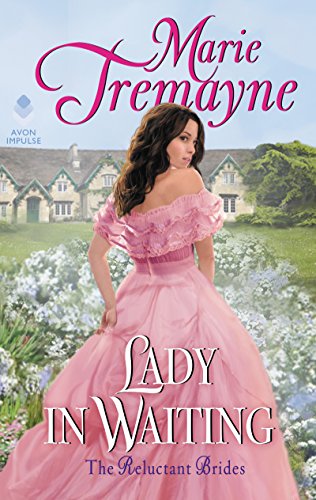 The only chemistry on the page between Clara, turned into Helen the housemaid, and William the Earl of Ashworth, was a severe case of insta-lust, which felt empty and flat, especially in the case of repetitive language and repetitive non-encounters that all start and end almost the exact same way. There's no emotional attachment between Clara and the earl, namely because they have no meaningful interactions. Any time there's a possibility of it, like when the earl is divulging his past trauma, it's overwhelmed by the return of the insta-lust in the most inappropriate places, and never moving beyond that point. So as much as I wanted to like this story, it was extremely frustrating, and I found myself dropping it in the middle of a chapter to do other things- like laundry - which should tell you all you need to know.

I also have to take umbrage with the unbelievability of the premise as it's framed here. I can't say that earls and maids don't fall in love, but the stringent class standards of this period are paid an empty lip service here without it being really addressed and organic to the plot in an authentic way. Tremayne plays loose and fast with the rules too much, to the point where it's clear they don't actually matter in this book, and it makes me question whether the the author understands at all how pervasive those divisions were. At no time do I buy that Clara passes as a maid, and at no time is she overwhelmed by her delicacy and naivete, which she absolutely would be. That should be part of this story, but it isn't. We're just supposed to swallow these loosely bound threads that put Clara and William constantly in the same room.

I also don't buy a virginal bluestocking having the same urges as a rake. Those desires can be awakened, yes, but the amount of female initiation cuts against the character that Tremayne has attempted to paint here of a sheltered heiress.

Worse still, it's made clear over time that the only way the characters' attraction would be acceptable was if she was high-born. How convenient. Except it's not, because that underlying message makes me want to pull my hair out. Should I root for the dude who would only love her if she had the right birth and blood? It turns out fine in the end, but it's too little too late, after all the mistreatment she's suffered throughout the novel.

I only realized how much I like the male POV in such stories when it was taken away. It was there, sort of, but they were few and far between, and extremely unbalanced between Clara's dominating narrative and Will's, and not in a way that progresses the plot even as you switch characters, which is something Dare is a master of. Most of the time in this case, it becomes a retread of events you've already read about, which of course added to the plodding, repetitive nature of the story.