Mind-Bendingly Good Horror: The Grip of It 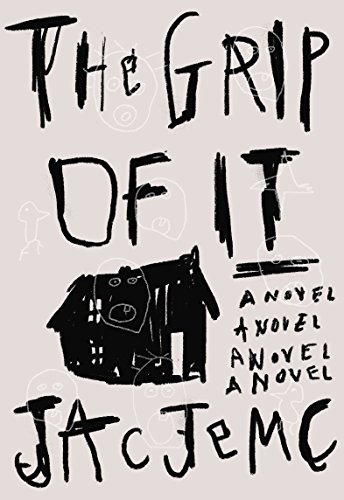 I go into contemporary horror fiction warily. I must, because so much horror that has been written in recent years is not horror at all, but melodrama and social commentary parading as horror. I'm not saying those elements can't be important to horror literature, but when they swallow up the main tenets of strange and distubing fiction, then what you've done is pay lip service to the genre, rather than push it forward.

The Grip of It by Jac Jemc is not in that camp. It's a short, sharp novel, where the jaunty prose keeps you on your toes. The economy of words and the superlative word choices given the sparsity of the sentences drew me in. As I got deeper into the book, I realized that that sort of voice was necessary to tell this story properly, and produced an added layer of atmosphere and mood to the narrative, a sort of menace and urgency laid throughout.

This book delivered that in spades. The haunting is something that happens both within and without the characters, in the physical realm as well as in their pysches and, in the case of Julie, their bodies. But there was also a good grounding in the contemporary world and how people would react to such phenomena. All the senses were utilized here (they always should be, but they seldom are), and the collection of strange happenings in this story gave a very robust and tense picture of the lives of this couple in their new house.

The architecture of the house could have been pushed further, but the focus was meant to be on the individuals, not on a house that's sentient (it's not), so I don't fault Jemc for that. The sometimes complete breakdown of time and space were executed perfectly. That's not an easy thing to do, and have it translate on the page in a way that a reader not inside the author's head will understand. Here's where Jemc's ability to write exactly what she means is so important, and makes the prose transcendent.

At first, I didn't appreciate the constant switching of the POV, but I realize that it was absolutely necessary to highlight how both James and Julie are experiencing the house - in ways that are sometimes the same and sometimes different, and to see how what they keep from each other vs what they share makes all the difference. It wasn't melodramatic in the slightest- it served the plot, a solid horror plot, and said something deeply resonant and important about relationships and self-realization at the same time. To all those other horror authors out there, making tons of money on books that just flat-out don't scare me (I'm looking at you, Josh Malerman, Paul Tremblay, John Langan): this is how it's done.