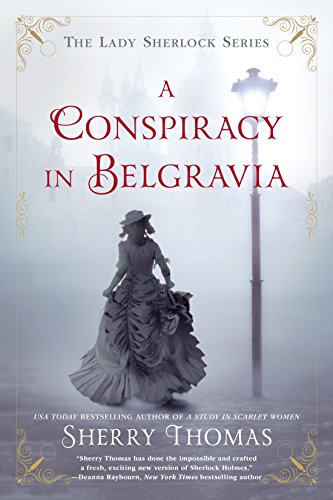 Despite shying away from the glut of Sherlock Holmes pastiches out there, I've grown attached to the Lady Sherlock series by Sherry Thomas. The second book in the series, A Conspiracy in Belgravia, was a solid contribution. That's always a good thing for me, because far too often that sophomoric slump rears its ugly head-secondary books have to stand on their own two feet with compelling plots of their own, since the characters have been previously established.

This book did that, with a new (set) of cases and intrigues that focused not only on all the ways that Charlotte is a sleuth of impressive skill, but it also drew the narrative net tighter around the characters we already knew - Charlotte's sisters, the "fallen" women who take her in, and the wife of her childhood friend Lord Ingram - the one who "got away." In that way, we get to see a character that was greatly demonized in the first book for the cold relationship between her and her husband. The growth of this character dynamic between the married couple with Charlotte intimately involved is promised to continue in the third installment (I won't spoil it now, but I can't wait for that). Along with that you get a good dose of the sinister, suspicious, and criminal that you expect of any Holmes story, and that sits very close to home.

All in all, nothing incredibly new about this new mystery, but that clearly wasn't the point - it was more about looking at the characters that Sherry has built more closely, and that was an excellent choice. Full steam ahead.